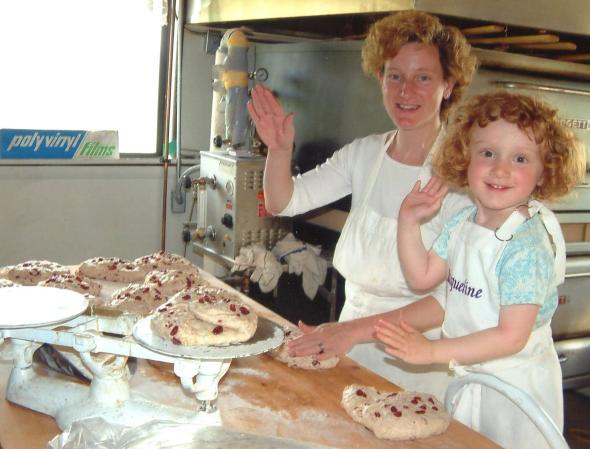 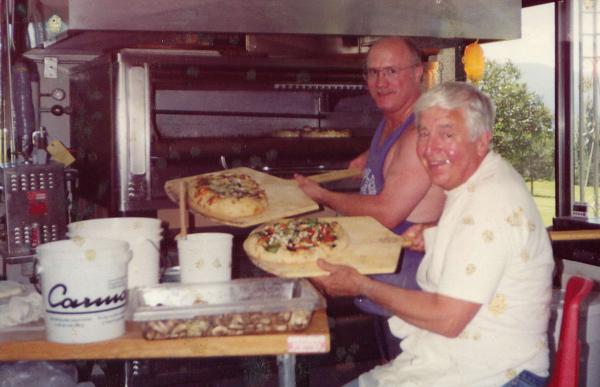 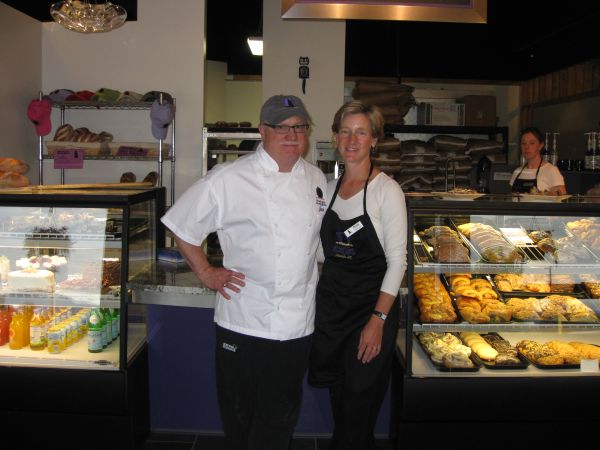 Fifteen years ago, Jack & Christy Wich were living in Montpelier, VT, where Jack worked as a first-year Chef Instructor at the New England Culinary Institute.  Christy, a native Montanan, wanted to be closer to her parents in Helena, and so they made the decision to move to Missoula, MT and fulfill Jack’s lifelong dream of opening his own bakery.  Little did they know how their bakery story would unfold.

Christy’s parents helped them find a house with a large daylight basement that could be converted into a commercial kitchen. That winter, Jack and Christy began the process of purchasing essential commercial baking equipment and obtaining the necessary permits and licenses from the County.  Their goal was to have the bakery open and running in time to sell Jack’s delicious organic hearth breads at the Missoula Farmer’s Market in the spring.

Missoula received the new bakery well, and the demand for the Black Cat’s bread steadily increased.  The neighbors grew accustomed to the delightful smell of baking breads on Friday nights in preparation for Saturday’s Market.  To keep up with the increased demand, Christy’s parents would travel from Helena each week to help out.  Her mother would cook large meals to feed the bakery staff, and her father helped clean the bakery while they were all selling at the Market.  His only payment request: a six-pack of his favorite Heineken beer!

As the business continued to grow and the Market closed for the season, the Black Cat began preparations to sell their Christmas Stollen.  They had taken advantage of the Market to advertise their mail order Stollen and had a sign-up sheet for interested customers, ensuring continued income during the winter.  When family arrived for the holidays, they were greeted by falling snow and the smell of fresh Stollen baking in the basement.  Each year, more and more people would call and request Stollen to create the perfect holiday celebration, and the Black Cat’s Stollen became part of many family traditions.

Later that year, there was a new “bun in the oven”.  Nine months later, one evening, as they were getting ready to bake to fill their wholesale orders, their daughter Jacqueline decided it was time to be introduced to the world!  With the help of friends and family, all went well.  Over the years, the Wich house became the favorite place for Friday night play dates, because the bakery was always baking tasty sweet treats!

As the years quickly passed, the Black Cat name grew and their basement kitchen started to shrink.  After 13 years, the Bake Shop was moved out of the house. (Thank you God!!)  With great help and support from Gary Siemens, the Black Cat began to look for a location.  Preparations began and plans were drawn up, and in June 2010 the Black Cat Bake Shop opened at 2000 West Broadway in Missoula, MT.

Thanks goes out to the entire community for helping make the new shop a success!  Please continue to stop in for your favorite Black Cat treats! 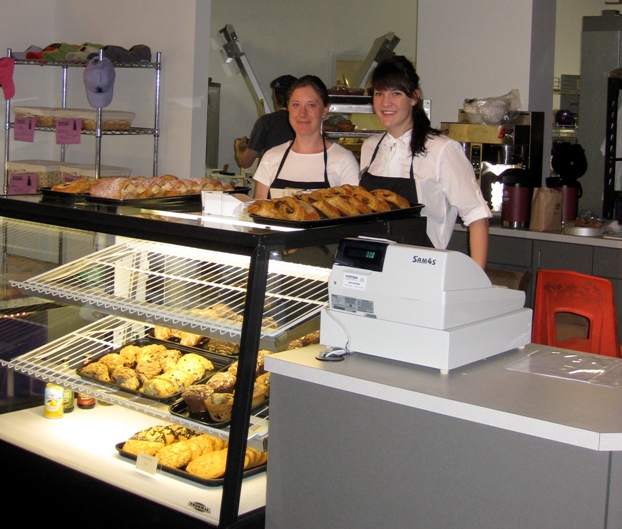 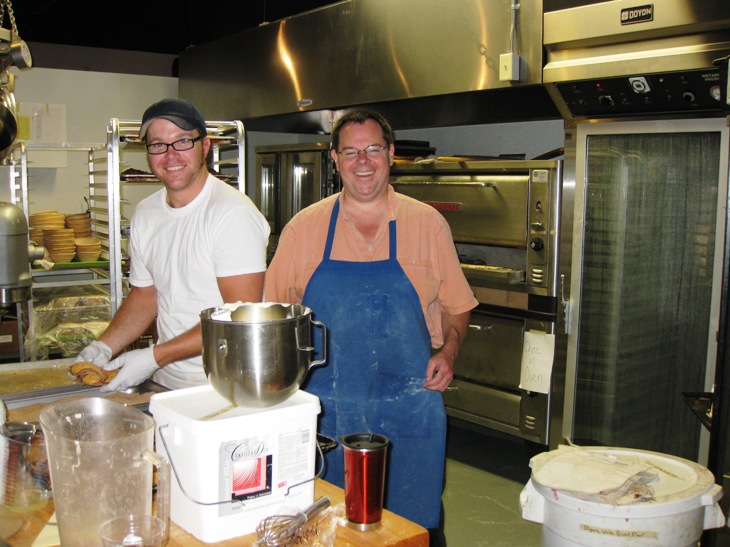 The Black Cat Bake Shop has been in operation for 18 years (since 1997), with 13 of those years working from the Wich’s home.  As the demand for their baked goods increased, they began to hire staff who were fondly known as part of the Black Cat “family”.  Because baking hours are crazy, the employees were at the house all times of the day and night, and shared many meals with the family.  Jackie recalls that some of her best memories growing up were sitting down for meals together with the Black Cat "family”.

The Story of The Black Cat

Everyone wants to have a “Black Cat Day”! That was Jack’s motto at the New England Culinary Institute where he was a first-year student bakery instructor.

Each class had seven students and lasted for three intense weeks. This was not your typical college style class! It began at 3:00 AM each morning, and students were expected to be “bright-eyed and bushy-tailed”!

The culinary school had a retail bakery, two restaurants, and a catering department. Each student was expected to work in the school’s commercial properties as part of their training for practical real-world experience.  Chef Wich had a reputation for being very demanding of his students, because he wanted them to understand the dedication and patience that was required in order to become successful.  His goal for them was to make it right the first time, every time!  If it wasn’t up to his standards, they would bake it until it passed!

One of the ways Chef Wich taught his students was through the use of stories and visual aids.  He often told stories about his little black cat called “Katie”--also referred to as his “first child”--that was adopted from the local humane society.  Jack felt that this cat was truly “perfect and wonderful”.   When his students were able to make 20-30 different items perfectly, he would call that day a “Black Cat Day”.   All the new students had heard about the “Black Cat Day” and hoped their class could achieve it during their three weeks with Chef Jack!

Jack is as dedicated now as he was then to serving only the best products to his customers!  Here at the Black Cat Bake Shop, the entire staff works hard alongside Jack to make every day a “Black Cat Day”! 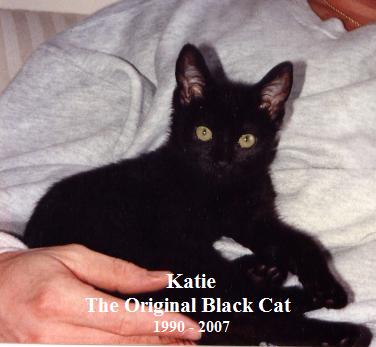 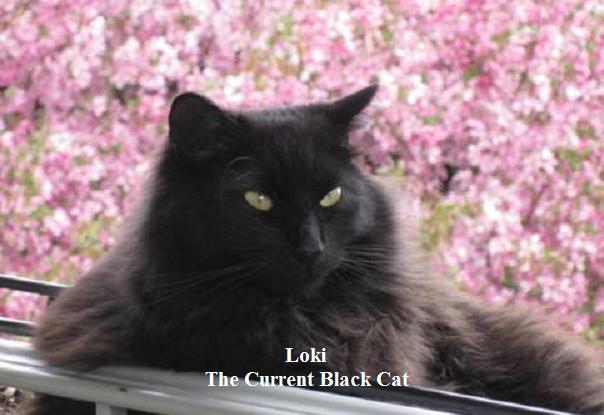 Jack grew up the youngest of three children in Elmira, NY, located in the western part of upstate New York near the Finger Lakes region. It’s a beautiful location known for its rolling hills, famous glider rides, and Mark Twain’s secluded mountain estate where he did much of his writing.

Both of Jack’s parents worked from home. His father Jack Sr. was a paper salesman, and his mother Maxine was a Physical Education Director at the local YWCA. Maxine’s schedule didn’t allow for much cooking, but she made a few family favorites such as potato salad, club sauce, and a traditional Sunday pot roast. She wasn’t much for baking.

Jackie, as Jack was called back then, remembers the first day he was introduced to baking. He was at the neighbor lady’s house on a day she was making cookies, and he asked to help. She showed him how to measure out the flour and sugar, and then put the dough on the cookie sheets. Of course, Jackie wanted to make them big! The neighbor asked what he was going to call his big cookies and Jackie answered, “Truck Driver Cookies”! The experience was a great one and Jack was hooked!

After Jack graduated from high school, he went to work at the local Mohawk Bakery in Elmira. It was there that he learned the basics of baking bread, donuts, and cookies and found he truly enjoyed the work. This motivated him to enroll at Johnson and Wales Culinary School in Province, Rhode Island, and his culinary career was launched.

During his early career, Jack had the opportunity to study under Chef Roland Mesnier, who was the White House’s Master Pastry Chef at that time, and even did part of his training at the White House.

Jack began working for Sheraton Hotels, and his work ethic and baking abilities were noticed. He was transferred to Arizona to help improve production the Sheraton there, and the he was transferred to a brand new Sheraton Hotel in Greensboro, NC where he was to be the Head Pastry Chef. He often had articles written in the local paper about his desserts and wedding cakes and became a local celebrity chef.

About that time, the Mayflower Hotel in Washington D.C. contacted him regarding the Executive Pastry Chef position they needed to fill. This hotel is on the National Register of Historical Places and the favored site for the Nation Capital’s Inaugural Balls. After careful consideration, Jack accepted the position. It was a very exciting and stressful work environment, as he was making desserts for not only hotel guests but also Presidents and Royals.

Christy was enrolled in the Mayflower’s hotel management training program and was hired as the Director of VIP Services after a year of training. Had Jack not accepted the position at the Mayflower, the Black Cat Bake Shop probably wouldn’t exist today! She and Jack met at the hotel and had the privilege of working together there for three years.

After they got engaged, Jack accepted a teaching position at the New England Culinary Institute in Montpelier, VT. It was the toughest job he ever loved! At three-o-clock each morning, seven students would show up for Bake Class I and Jack’s day would begin! The school had a retail bake shop called La Brioche, and many of the pastries you can purchase at the Black Cat today were perfected through the years of baking for La Brioche. Christy also worked with Jack at the Culinary Institute as a manager of La Brioche. Finally, after seven-and-a-half years, it was time to move to Missoula and start their own Bakery! 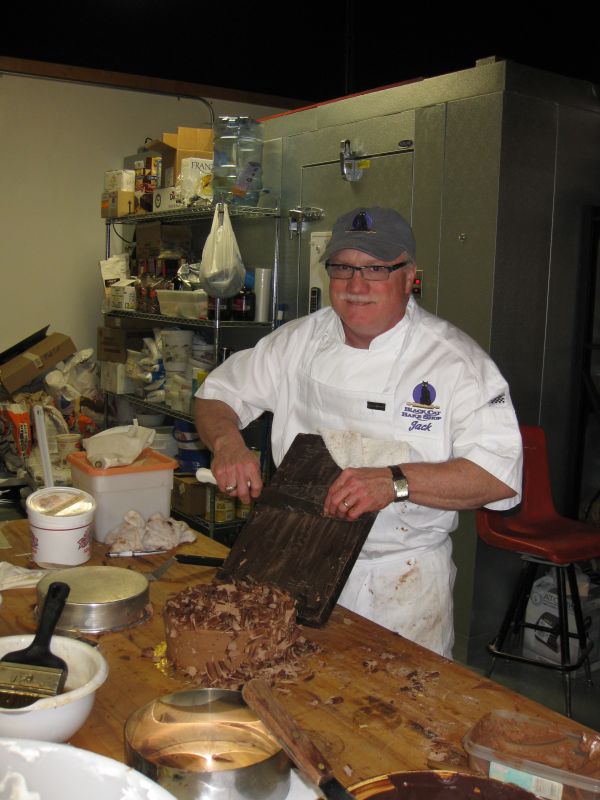 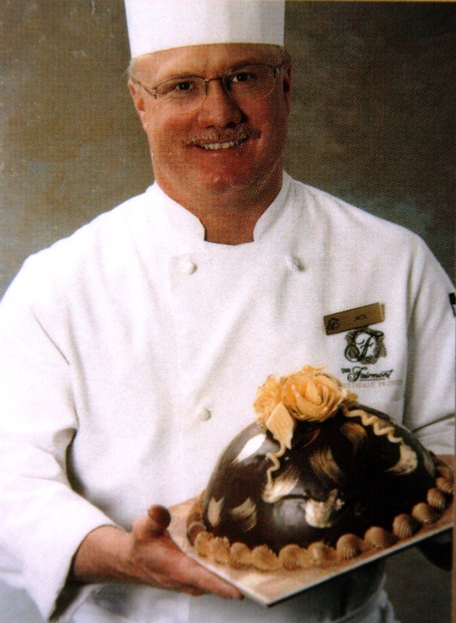 Today, the Wich family lives at their dream farm in Frenchtown, MT. Christy and Jackie are avid horse riders and the whole family enjoys their even dozen of horses, mini donkeys, dogs, and cats (including a Black Cat), which keep them busy in their non-baking hours. The retail store has been an exciting venture that also takes a lot of hard work every day. Christy’s father continues to be an invaluable help by making bank deposits, doing the bakery laundry, and running errands for the endless items that always seem to be needed.

Jack is dedicated to providing perfection in his product and the whole family is grateful and proud of the employees they have to help Jack have a “Black Cat Day” every day!

Thanks goes out to the entire community for helping make the new shop a success! Please continue to stop in for your favorite Black Cat treats!